We are facing drastical ecological challenges as natural disasters at every level – locally, regionally and globally. Extreme high temperatures and long-lasting droughts occur all over the places, while in other regions people are dealing with too much rain and floodings. Human individuals and communities are particularly vulnerable, facing such detrimental natural disasters. Ironically, these aftermaths, some associated with climate change, are exactly the results of the industrial modernity. Here, humans have encountered two absurd situations, is the nature so indifferent to our human beings when it shows its fierce and ruthless appearance or is the nature so overwhelmingly manipulated by us and we are simply having a “ taste of own medicine”. This post will examine a unique position – where do human stand in the “beloved” Mother Nature?

Just simply turn on the headlines and we will see a wide range of natural disasters happening this summer – unprecedented rainfall and flooding hit Southern China in Guangdong and Fujian Province in June, in Europe France and Portugal reported 42+C extreme temperature in July, while in UK more than 40 wildfire sparkled across the country and the persistent drought dried the Thames river to its lowest point from its upstream in August, etc.

Then we begin to wonder – what has gone wrong? This question brings forth both melancholy nostalgia of the calm and peaceful “old days” and serious thinking about our situations. This post will dialectically examine two positions, both show some deeply-rooted absurdity, where we stand in front of Mother Nature.

Facing natural disasters, such as flooding, drought, sea level rise, earth quake and volcano eruptions, the once gentle and mild climate demonstrating its most fierce appearance to us, which terrifies us to the coldest feet to make changes. Here introduces the first absurd position – we are once very confident by our abilities to transform the environments and improve living conditions on global scale for several centuries, but we are in fact so tiny and hopeless to these gigantic forces of nature.

To go deeper into this absurdity, I would quote one paragraph from Camus’ writing, the Myths of Sisyphus, where he introduced a kind of absurdity as indifference and strangeness.

“… Perceiving that the world is “dense”, sensing to what a degree a stone is foreign and irreducible to us, with what intensity nature or a land scape can negate us. At the heart of all beauty lies something inhuman and these hills, the softness of the sky, the outline of these tress at this very minute lose the illusory meaning with which we had clothed them, henceforth more remote than a lost paradise. The primitive hostility of the world rises up to face us across millennia, for a second we cease to understand it because for centuries we have understood in it solely the images and designs that we had attributed to it beforehand, because henceforth we lact the power to make use of that artifice. The world evades us because it becomes itself again. That stage scenery masked by habit becomes again what it is. It withdraws at a distance from us… Just one thing: that denseness and that strangeness of the world is the absurd.”

To Camus, humans’ once confident opinion towards nature were merely illusory meaning we had clothed them. When reaching deeper, we found a cold, dense, and strange hostility of the world, whose true appearance that would terrify us.

We can go into the Nature’s strange and indifferent absurdity from a milder angle – let’s take the lockdown at the beginning of the Covid-19 as an example. It is to all of us’s surprise that at the first a few weeks of lockdown in global cities, without daily human “interference”, the Nature began to “heal” on its own pace. More commonly, we have seen wildlife appeared within cities and took over the streets, as human remained indoors. In India, Mount Himalaya became visible for the first time in last 30 years, thanks to shutting down of factories and emission stopped. This year in Shanghai, weeds started to grow out of the streets, covering the stairs in the front of an Apple Store over the three-month lockdown period from Mar to May. To the point of indifferent and strange absurdity, what a tiny role human has played in Nature and it is actually better off without us. 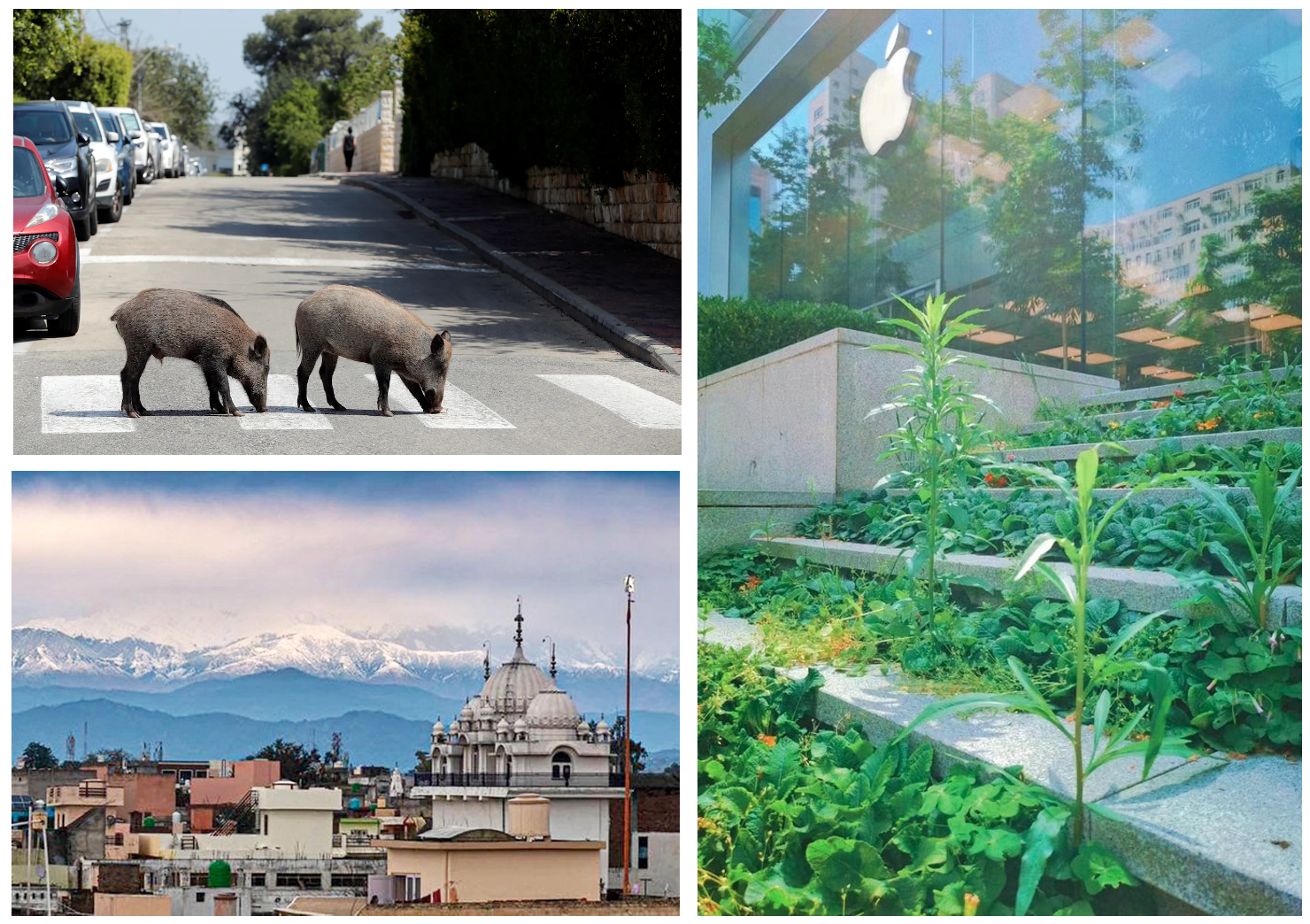 Some suspicious doubts and denials may shot an unpleasant voice here – if human are eventually so tiny and insignificant, how would the huge scale “climate change” be the results of human activities? To be exact, I complete disagree with this above opinion – tons of scientific papers and IPCC reports have laid solid ground to settle such argument. Here I want to examine further on this second absurd condition.

These drastical changes in ecology does not come at once, they are the accumulated work that started after the industrial revolution, tracing back to 1850, the start of using machine and industry, as a reference point. 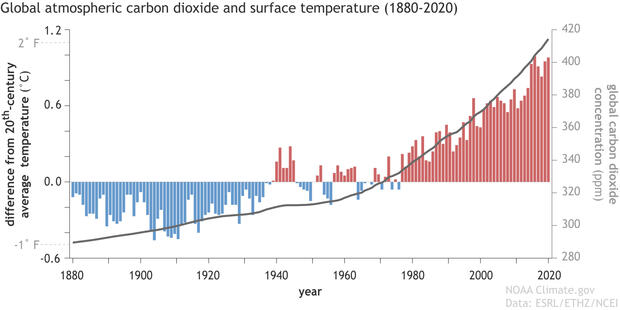 On the other hand, it should be noted that the environment we rely on living is stable only within a narrow window – so fragile and complex that once disturbed and passed a tipping point, would trigger the snowball effect. To better illustrate this point, I will quote Zizek in his recent writing from IAI and seminar with Yuval Harari.

The absurd sense here is that our humans’ ability, such as using fire, building dams, irrigations, fossil fuels, nuclear energy, etc, once we used to gain more freedom from Nature –  be able to walk in the dark, eat cooked food, dispel beasts – is now constraining our freedom.

There is no better example than turning on air conditioning (AC) in summer to demonstrate this paradoxical situation. Living in cities with AC is such a privilege that what we need to do is just turn on the remote, enjoy the cool air, and pay utility bills. However, this solution, at least in 35 years ago, was not as simple – the cooling refrigerant used in AC and refrigerators, Chlorofluorocarbons (known as CFCs), would have a detrimental effect to the Ozone layer in stratosphere, creating an “Ozone hole” over Antarctica so that the UV sunlight can penetrate and causing damages to human skins and plants, and raise Earth’s temperature. It is the exact action, cooling air temperature in summer, may have raise temperature in contrary (what an absurd situation). Hopefully, the UNEP signed Montreal Protocol in 1987 has banned the CFCs from cooling refrigerant and recent research has seen recovery in the Antarctica Ozone hole – an environmental success story.

Finally, I want to finish this post with some hope and light 😀 After examining these two kinds of absurdity in Nature, naturally we arrive at an important question – What attitude should we bear and what change should we expect?

Also to bring in some humorous vibe in this post, I want to finish with two jokes. People always say the optimism and pessimism as glass half full or half empty. We can think in a better and more cherishable way as optimists – the glass is half full and the half is wine. Yes, we really need to evaluate what we currently have in our hands and make the most use out of it.

The second joke would be a metaphor. Imagine we now live in a house, it’s raining wildly outside, and the roof is leaking from a hole. What would we do? We probably would put a bucket on the floor to hold these leaking drops. Sooner or later, one bucket would be full and people decide we need more buckets to hold the leaking water. It will be a long time for the buckets to stack up piles in the house until we finally realize – we should have fix the roof from the first place. Now look around in our house – we really need people to start fixing the roof!

(This post is inspired by two writings I read in recent months, Camus’ The Myths of Sisyphus and Zizek’s Freedom from nature: the ultimate enslavement)